Immerse yourself in the sights, sounds, flora, and fauna and discover what the Alpine Environment has to offer.

Dinner Plain village is totally surrounded by the Alpine National Park, woven throughout the natural environment are Snow Gum Woodland and open sub-Alpine grasslands. Protection of the local environment is a high priority, such as;

The Alpine Environment is one of the most pristine environments in Australia. It contains a number of unique flora and fauna species. The park supports 1100 native plant species, 12 of which (including the Bogong daisy bush and silky daisy) are found only within the park and 38 of National Significance.

Among its fauna is the rare Mountain Pygmy-Possum, the world's only exclusively Alpine marsupial, which stores food to last through the winter. Smoky Mouse, Broad toothed Rat, Powerful Owl, Spotted Tree Frog and She-oak Skink.

Significant populations of rare or threatened flora and fauna are protected for conservation purposes by Special Protection Zones in State Forest.Threats include the invasion of weed species, which can travel great distances on the tyre’s of vehicles and the underneath of footwear, and feral animals attacking local fauna.

Alpine Bogs are rare in Australia; they can be defined as a permanently wet area of ground that supports a range of flora and fauna. Alpine Bogs are an iconic part of the Australian landscape and their health is an indicator of the success of environmental management practices. The survival of the Alpine Bog is threatened by development, feral animals, weed invasion and global warming.

Our grasslands are unique and unfortunately are under threat all over Australia.
Your local Council and DSE can help you identify native grasses.

Snow gum forests take many years to establish and the growth rate of the snow gum is very slow. Many fauna species live in snow gum forests.
Snow gum survival is threatened by development and bush fires.

Dinner Plain village is totally surrounded by the Alpine National Park, making protection of the local environment a high priority.In December 2004, the Omeo Landcare group welcomed members from Dinner Plain. Residents of Dinner Plain have now formed a sub group to enable them to concentrate on issues and activities for their local area, with assistance from the main group executive. These include partnerships with Forests, Parks Vic, Landcare and private landholders, alpine weed control, vegetation and track management and protection.

An online community has been established to allow sharing of information on projects, receive feedback on identified issues, etc.

Parks Victoria is responsible for management of the Alpine National Park. A number of publications are available to assist in maximising your holiday in the region.

For more information on the Alpine National Park go to: 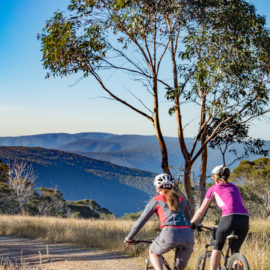